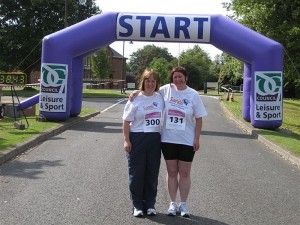 Dumfries and Galloway SANDS were chosen as one of the good causes to benefit from the 2010 Women’s Run 4 Health organised by Dumfries Devorgilla Rotary Club. The 5km event took place at the Crichton on Sunday 27th June. The Easterbrook Hall provided each of the chosen charities with a stand to show our fundraising work. We were able to speak to members of the public about the cold cot we are raising funds to buy which will allow parents to spend longer with their baby.

Two of our group, Andrea and Dee, along with friends and supporters of SANDS and hundreds of other women (and children) took part to raise money for all of this year’s chosen charities. Each of us had paid our registration fee and many of us went on to collect sponsorship for the event. 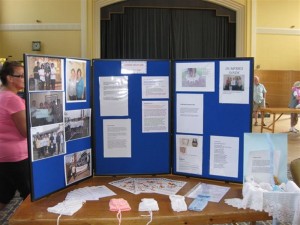 We all enjoyed a warm up while the rain threatened but, despite dark clouds remaining over the 5km course, it remained dry. The course started and finished in the Crichton grounds. It followed roads and paths suitable for buggies but also featured a steep decline and climb.

There were many red faces and achy legs at the end including Andrea and Dee. Andrea was happy to finish in a respectable 46 minutes (part run, part walk) while Dee mainly walked so took a bit longer.
Dumfries and Galloway SANDS received £2250 as their share of the money raised so thank you to everyone who took part and to Dumfries Devorgilla Rotary for thinking of us. 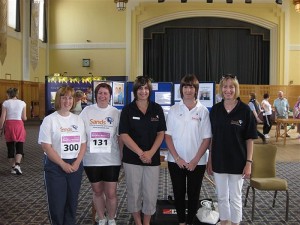