Cheque from June and Mike Rogerson of Dumfries 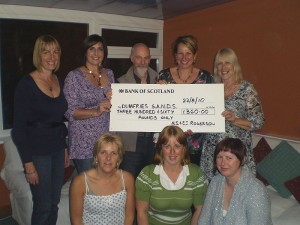 Dumfries and Galloway Sands (Stillbirth and Neonatal Death Charity) were delighted to be presented with a cheque from June and Mike Rogerson of Dumfries (pictured along with members of the charity).  June and Mike recently celebrated their Ruby Wedding Anniversary and very kindly asked that friends and family make a donation to Sands instead of buying presents.  June and Mike suffered their own loss, when their little boy died soon after birth in October 1972.  At that time there was no support and Sands did not exist.  In making their generous donation of £360, June and Mike hope that bereaved parents locally can continue to receive the support that they didn’t get.  Dumfries Sands would like to take this opportunity to thank the kind family and friends of June and Mike.

Dumfries Sands offers support to anyone effected by the death of a baby and can be contacted on 07864709228.