An amazing £6,000 raised by Debbie and Gordon Macdonald 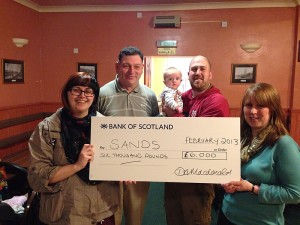 An amazing £6,000 raised by Debbie and Gordon Macdonald

After two hugely successful fundraising days held in January in memory of their little girl Freya, Gordon and Debbie Macdonald raised the amazing sum of £6,000 for Dumfries and Galloway Sands.

“The teddy bears picnic attendance was overwhelming – never under estimate the power of Facebook! It was great to see so many kids and their teddy bears and who had raised lots and lots of pennies! All kids completely the walk and some in record time! Everyone had a great time, the weather stayed dry and we all enjoyed our snacks in the play park afterwards!

The games day again was a great success, there was so much hard work that went into the day before hand and the guys did a great job of pulling in lots of money to get waxed. The trophies were won by:

Thanks to Bill Imrie for the use of the Normandy and to all my little helpers who made the day possible.”

Dumfries and Galloway Sands would like to say a huge thank you to Debbie and Gordon and everyone else involved in the days.

This site uses Akismet to reduce spam. Learn how your comment data is processed.