Sunday 14th September saw a charity Golf Day held at Dumfries and Galloway Golf Club in aid of Sands and Cash for kids.

The chance to be entered into a Million pound draw (if a hole in one achieved on the day) and raise money for the two charities, drew entries from an amazing 31 teams, including 5 junior teams.

Perfect golfing weather saw the first team out at 0930hrs and the last team teeing off around 1530hrs.  Nobody managed a hole in one on the day but a winning score of 86 meant that Derek Murphy, C Kirkaldie, J McGill and B Gray collected  the trophy for the best senior team.  Fraser Ciarns, D Robertson, T Robertson and L Fairbairn were the winning junior team with a score of 90. 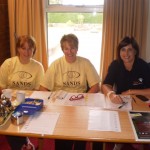 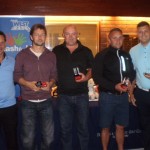 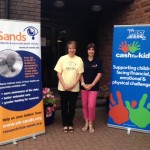 Other winners on the day were as follows:-

An amazing £1545 was raised for each charity.  Thanks go to Dumfries and Galloway Golf Club for hosting the event and Vice Captain, Billy Haining and other members for helping out on the day.  Thanks also to Graeme Anderson of Anderson Engineering, Dumfries for sponsoring the trophies and to all the other sponsors of the various holes and to everyone who donated raffle prizes.  Thanks to Grant Seaton for his help and to Tommy Jardine for his exceptional organising skills.