Saturday 30th April saw the great and the good of Dumfries and Galloway (and further afield) put on their finery for our third grand fundraising ball at the beautiful Easterbrook Hall, Dumfries. On arrival we were met by the stirring sound of the bagpipes of piper Callum Watson who piped everyone in. A glass of Prosecco awaited everyone in the Gilchrist room where people mingled for a chat before being invited through to the main hall. The room looked stunning. A Scottish theme of tartan, thistles and candles courtesy of Tantrum events from Dumfries. 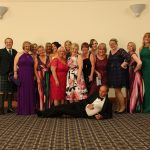 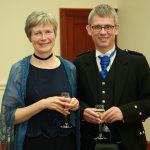 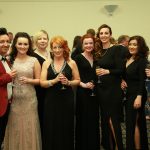 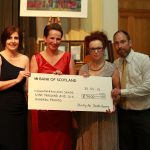 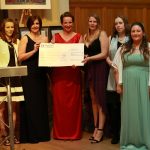 270 guests took their seats and were welcomed by our compère for the night, John Glover. John went on to introduce our chair Alison Hall who gave a short talk about the charity and what we have achieved recently and what we hope to achieve in the future. We then had two cheque presentations. Firstly an amazing £9,600 from Kirsty and Craig Bowie who organised Strictly for Sands in Thornhill which had taken place the weekend before the ball. Secondly a wonderful £500 from students from UWS who organised a band night at the Granary in aid of D & G Sands. A big thank you goes to everyone involved in both these events. John then introduced our guest of honour, Fiona Armstrong, newly appointed Lord Lieutenant of Dumfries and local TV presenter. Fiona introduced a short film which she had made about Dumfries And Galloway Sands for her Border Life programme. The film, about the work of our group, included a moving interview with Fran and Roger Doherty who were supported by Dumfries and Galloway Sands after the death of their baby boy Charlie.

We then enjoyed a delicious 3 course meal which was much enjoyed by everyone. After the meal local DJ Tommy Jardine hosted our live auction which, along with a silent auction and raffle, helped us raise an amazing £12,000 on the night. Local photographer Ewan Cannon was also on hand throughout the night taking photographs in his pop up studio in the Gilchrist Room. Pictures can be purchased from Ewan’s website – www.ewancannonphotography.co.uk

We then danced the night away with the band Soul Train. The dance floor was never empty.

Huge thanks go to, John Glover, Tommy Jardine, Fiona Armstrong, Callum Watson, Ewan Cannon, Tantrum Events, Abby Burn from Purple Box Productions, Jenna and Eoin Laidlaw, Easterbrook Hall staff, Soul Train, everyone who very kindly donated the amazing prizes for our auctions and raffle and of course to the Sands committee and our friends and family for their support. It was an amazing night. Roll on 2018!