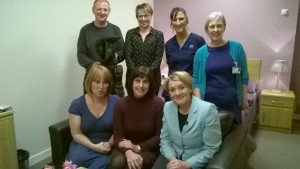 On Monday 19th January 2015 the documentary Border Life featured a piece on Dumfries and Galloway Sands.  The crew from Border TV spent a day with Alison, Susan and Dee highlighting what the charity does locally.  The programme shows what our group provides Cresswell with and also features an interview with Roger and Fran Doherty, who we have recently supported, and who lost their wee boy Charlie just six weeks prior to filming.

If you missed the programme it can be viewed online – http://www.itv.com/news/border/story/2014-07-23/watch-border-life/

Our thanks go to Fiona Armstrong of Border TV who handled everything with such sensitivity and to her camera man on the day who shot everything so beautifully.

Special thanks go to the brave Fran and Roger who agreed to appear on film so soon after losing Charlie and for saying such lovely things about our charity.

Roger and some of his friends are taking part in this years Kirroughtree Hillbilly Duathlon in memory of Charlie and to raise funds for Dumfries and Galloway Sands.  If you can please have a look at their Just Giving Page