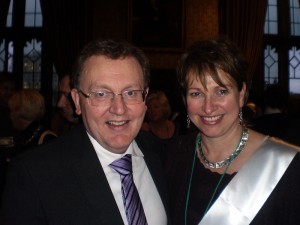 Alison Hall chair of D&G Sands recently attended a reception at Westminster to launch the latest report from Sands calling for urgent action to tackle the unacceptable number of babies dying in the UK.

Sands members were asked to invite their MP’s to attend the event to hear the facts and figures around Stillbirth and how the numbers have not decreased in over 10years. Sands firmly believe more could be done to prevent babies’ deaths and spare families the desperate heartbreak of losing their precious baby. Alison was delighted that Mr David Mundell Conservative MP for Dumfriesshire, Clydesdale and Tweeddale agreed to join her at the event.

Firstly we were shown into the member’s dining room for afternoon tea. Each Sands member meeting their MP were given a sash to wear with the Sands logo on and invited to the media desk to have a photo taken with your MP.

Dr. Daniel Poulter MP started the event by explaining why we were all in attendance.

There was then a presentation by Neal Long, Chief Executive of Sands outlining what needs to be done, urging more research and the development of strategies to identify which babies may be at risk. Latest figures show there were almost 300 stillbirths in Scotland in 2010 and 4110 in the UK.  A third of stillborn babies are born late in pregnancy (after 37 weeks), at a stage where they might have been delivered safely. Routine ante natal care is failing to detect too many babies who need help.

There have been important steps forward. The Scottish Government has tasked an expert group to identify and implement changes that will impact on mortality in Scotland of which Alison Hall and Ann McMurray (Glasgow Sands) are members. Key themes include developing parent information leaflets advising about fetal movements, and national guidance for Scotland for the detection and management of growth restriction. The group hope to standardise perinatal mortality reviews with the aim that lessons learned should not be lost.

We then had a very moving account from a bereaved father Colin Pigeon of Belfast Sands about the circumstances of his baby daughter’s death. Colin reminded everyone of how many people are actually affected by the death of a baby. Siblings, aunts, uncles, grandmothers, grandfathers, colleagues and friends.

The summing up was done by Anne Milton MP, Parliamentary Under Secretary of State for Public Health. Who helped deliver a petition to No. 10 Downing St called “Stop the Stillbirth Scandal” which Grazia magazine and Sands launched in September 2011.